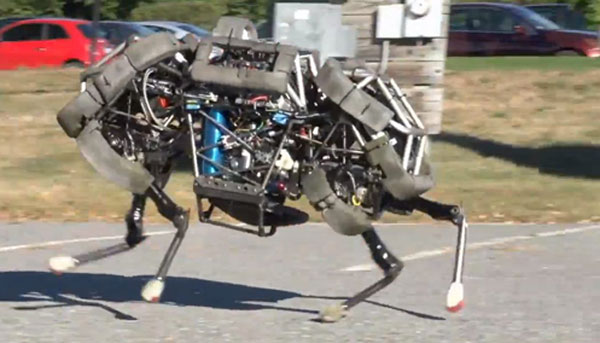 Can Your Job Be Done by A Robot?

There is a well known saying that  I researched on the Big Apple that goes like this, ’Generals always fight the last war”  which means that military strategy often focuses on what has happened rather than what will happen. “There is a tendency in many armies to spend the peace time studying how to fight the last war” was cited in 1929 and “peacetime generals are always fighting the last war” has been cited in print in 1937. During World War II in the early 1940s, the saying was quite frequently used. An economics version of the military saying—“economists fight the last depression”—also became familiar in the 1940s. The “fight the last war’ saying is used in government and business. I’d like to add to this great tradition that people always fight the last culture war. While we are busy replaying old cultural identity wars the world around us changes at such a fast pace that we can’t see how many of the battle people are fighting based on identity could become meaningless. One real time example of this phenomenon is related the jobs. Specifically, the last election raised the hopes that we could bring more manufacturing jobs back to the United States.

Well if you read this beautifully produced sponsored content by BP entitled These Are The Droids You’re Looking For: Five Cool Robots That Are Changing The World We Live In you might think that the future is rosy because the Robot is our friend. But as you read on you’ll learn that:

Advances in nanomechanics and artificial intelligence now allow robots to perform important functions well beyond our own capabilities, including saving lives in the most inhospitable environments and helping us to understand our own human consciousness.

Hmm, you mean to tell me that while people are fighting in the streets over human identity related to race, religion, immigration status, and social class that that technology is ready to replace us? It seems we should not be as concerned about where the jobs are as we should on who or what will perform them.

Not worried about your job. Well, hold on and meet Atlas. Produced by the same company that developed the robotic internet sensations WildCat and Spot, Boston Dynamics’ Atlas is a high-mobility humanoid robot designed for search-and-rescue and other disaster response missions. Its programming and hardware are the results of a public contest following the Fukushima nuclear disaster. One of the world’s most advanced mobile robots, it can enter, drive, and exit a car; manipulate doorknobs and handles; dig and walk through rubble; climb ladders; affix fire hoses and turn valves, and operate power tools. Atlas uses laser surveying technology (LIDAR) to assess terrain and maneuver appropriately and can lift and carry heavy objects over long distances. Did I hear first responders?

“Bet you can’t wait to meet Pepper. Developed in Japan by Aldebaran Robotics, Pepper is a four-foot-tall companion robot whose sole purpose is to make people happy. Pepper uses facial and vocal recognition to ascertain human moods and responds accordingly. Marketed as an “emotion engine,” Pepper isn’t designed to do household chores but is meant to please its people with banter, jokes, and quick answers to anything you might otherwise enter into a search engine. There are 7,000 Peppers in homes across Japan, and the robot is currently being reprogrammed to understand American cultural cues. Presumably, that means Pepper will angrily debate the designated hitter rule and The Sopranos series finale. Your new dual-core, 1.6 gigahertz family member is available for under $2,000.”

It’s not just robots that are a threat to human work and productivity it’as also software. Workers wanting secure employment in coming decades will need skills that complement software applications, rather than compete with them.

Those who don’t possess such skills face a nearly-50 percent chance of having their occupations replaced by automation, according to two University of Oxford professors who studied technology’s impact on employment over the last 500 years.The career fields seen losing the most jobs include not just relatively low-skilled occupations such as telemarketing and retail sales, but also high-paying positions now held by accountants, auditors, budget analysts, technical writers and insurance adjusters, among others.All of those jobs face at least an 85 percent chance of being automated, say Carl Benedikt Frey and Michael Osborne in their 2013 paper, “The Future of Employment: How Susceptible are Jobs to Computerisation?”

The jobs most at risk all have one thing in common: they’re in occupations “mainly consisting of tasks following well-deﬁned procedures that can easily be performed by sophisticated algorithms,” the pair wrote. Even some highly-educated, technical occupations face relatively bleak chances of seeing growing employment in their field, as ever-smarter computers become better at analyzing massive amounts of data, to support all kinds of business decision-making.

So a word to the wise. We’re in a new age. Technology is unbounded, where machines perform jobs. Who needs people that can’t agree on anything, can’t get along and who insist on fighting the last culture war? Who needs people when after centuries they can’t unite around their shared humanity? Indeed not Robots.

Will Blackness be Relevant in the Future?
When Americans tried – and failed – to reunite Christianity
Can we talk about free speech on campus?
Uncategorized 23 Robots 3

American Pride Hits New Low; Few Proud of Political System - Gallup
U.S. adults' extreme pride in being American has been steadily weakening in recent years, and the current reading, from a June 3-16 Gallup poll, marks the lowest point to date.
What makes a good citizen? Voting, paying taxes, following the law top list - Pew Research Center
In a Pew Research Center survey in early 2018, around three-quarters of Americans (74%) said voting in elections was very important to what it means to be a good citizen, and around seven-in-ten said the same about paying taxes (71%) and always following
Defining generations: Where Millennials end and Generation Z begins - Pew
In order to keep the Millennial generation analytically meaningful, and to begin looking at what might be unique about the next cohort, Pew Research Center decided a year ago to use 1996 as the last birth year for Millennials for our future work.
Reparations and Black Americans' Attitudes About Race - Gallup
According to a recent report in the Washington Post, at least four Democratic presidential candidates -- Elizabeth Warren, Kamala Harris, Julian Castro and Marianne Williamson -- in one way or the other favor the idea of African-American reparations.
Public has negative views of the country’s racial progress; more than half say Trump has made race relations worse - Pew
About six-in-ten Americans (58%) say race relations in the U.S. are bad, and of those, few see them improving
Americans Less Satisfied With Treatment of Minority Groups - Gallup
Americans' satisfaction with the way several minority groups are treated in society has fallen in recent years. Significantly fewer Americans now than in 2016 are satisfied with the way immigrants, blacks, Hispanics and Asians are treated.
Chick-fil-A loses two airport deals in less than two weeks - CNBC
In the last two weeks, Chick-fil-A has missed out on two potentially lucrative airport contracts after local politicians raised concerns over the company's anti-LGBTQ history
Candace Owens Is the New Face of Black Conservatism - Washington Post
This is the inaugural rally of Blexit, her three-month-old campaign to encourage African Americans (and Latinos, and other minorities) to leave the Democratic Party — that is, mount a massive “black exit” from the left.
It’s not just you: New data shows more than half of young people in America don’t have a romantic partner - Washington Post
Just over half of Americans between the ages of 18 and 34 — 51 percent of them — said they do not have a steady romantic partner, according to data from the General Social Survey released this week. That 2018 figure is up significantly from 33 percent in
Nearly half of whites say a majority nonwhite population will weaken American culture - Pew Research
The U.S. Census Bureau predicts that, by 2050, blacks, Hispanics, Asians and other minorities will constitute a majority of the population.
Previous page - Next page