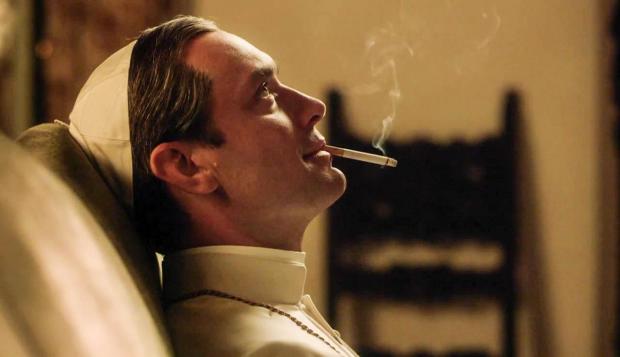 From Paolo Sorrentino, director of the Academy Award®-winning film ‘The Great Beauty,’ comes the beginning of the pontificate of Lenny Belardo, alias Pius XIII, the first American Pope in history. ‘The Young Pope’ tells the controversial story of the beginning of Pius XIII’s pontificate. Born Lenny Belardo, he is a complex and conflicted character, full of compassion toward the innocent and poor, yet so conservative he makes choices that border on radioactive. Critics who reviewed it after the premiere episode should tune in again because the storyline has turned.

Pope Pius XIII, played by two-time Academy Award® nominee Jude Law, is an erratic leader. While the forces driving him are complicated, the principal cause of Lenny’s unusual behavior and desire for radical revolution within the Vatican results from his abandonment by his parents, who left him at the gates of an orphanage at an early age.

When one’s feel like their self-identity is facing a fundamental threat, it leads to a significant crisis.  We’re forced to ask, who am I in this world? You can suffer an identity crisis after losing a loved one, being unjustly imprisoned, being fired unfairly, having a marriage end, or even losing an election.

What are some Identity Shifts that you’ve experienced?

Who we think we are can change in an instant, just as it did for Lenny after his abandonment in the Young Pope. I experienced an identity shift early in my life. It occurred one day on the playground. Someone blurted out the “you’re adopted – your real parents didn’t even want you.” That insult was followed up by laughter from the boys I was playing with, and from deep within came the burning sensation of humiliation.

One evening soon after the playground incident, I was home alone.  I don’t know where the chutzpah came from, but I went into my parents’ bedroom and their closet knowing that there, a green box hid the family’s most precious documents and the answers I needed.

If there were anything important to discover about my life, I would find it in that green box. As I rummaged through the contents, I carefully handled insurance papers and the deed to our house and other papers beyond my ability to comprehend. I explored the contents cautiously, like a thief, carefully placing each item back in its designated spot so my entry would go undetected. Then I found it, an old yellow newspaper clipping containing a picture of me as a two-year-old, holding a football in my small hand, and the headline:  “Coach and Mrs. Williams welcome new family member.”  Wow!  I was adopted.  At ten I had experienced my first profound identity shift, and it changed my life forever.

Although I had answered one crucial question, many others now needed solving.  Who were my “real” parents? Where are they now? How did I come to live with the people I called “Mom” and “Dad”?  Why didn’t my adopted parents tell me?

I didn’t know who I was anymore.  My identity Shift affected me profoundly on every level. Today in real time, the nation, government, and the world are undergoing an identity change. For some, this is a necessary course correction, for others, it creates fear and profound disillusionment.

The Young Pope reminded me that the choices we make during times of destabilizing identity shifts be they personal or national have an incalculable ripple effect. Those around the new Pope respond to the chaos and Machiavellian schemes he’s unleashed with fear.

How will we respond to the identity shift our country or perhaps your organization is experiencing today, with rage, fear, vindictiveness, self-pity, humiliation, false righteousness, or with faith, vision, intelligence, love? In a MultiDentity world, people are bound to act in all of the ways listed above.

The ten-episode series also stars Academy Award® winner Diane Keaton as Sister Mary, a nun from the U.S., now living in Vatican City. This show is not for everyone; it’s goofy, unpredictable and uncomfortable.  But if you hang in there with it, it might offer you a metaphorical perspective into the national and personal and global identity shifts we’re experiencing today, especially as they relate to our old ideas about power, leadership, and the role of our treasured institutions.

CHANNEL: HBO (To find out which channel HBO is for you, click here to go to TVGuide.com’s listings and change “Provider” to your cable/satellite TV provider. An HBO subscription is required to watch HBO programming.)

Dove apologizes for ad: We ‘missed the mark’ representing black women
The Real Star Wars Universe
THERE’S AN UNCONSCIOUS BIAS IN VIRTUAL MEETINGS. HERE’S HOW YOU CAN AVOID IT
MEDIA AND TECHNOLOGY 50