U.S. Hispanic population surpassed 60 million in 2019, but growth has slowed    Three-in-ten Millennials live with a spouse and child compared with 40% of Gen Xers at a comparable age
HomeGROUP IDENTITY 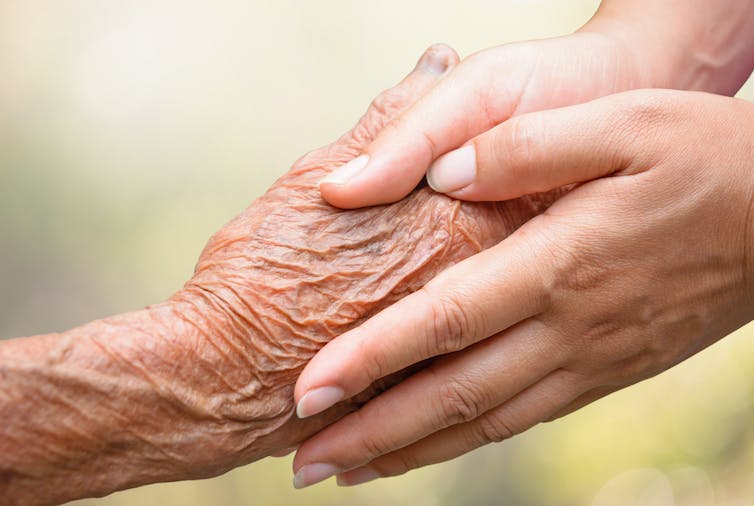 Most caregivers today are assisting their relatives. What will happen in the years ahead?
ChaiyonS021/Shutterstock.com

My sister Carol loves movies, but she hasn’t been out to see one in years. When she tries to watch one at home, she’s frequently interrupted. She shrugs this off, saying “Who needs to see movies when you’re living one?”

You see, my sister is living the plot from the movie “Groundhog Day.” She takes care of our mother, who suffers from dementia. Our mom asks the same questions over and over and only wants to watch a handful of classic TV shows, like “The Golden Girls” reruns. For this my sister earns nothing.

I marvel at how hard my sister works and how much she contributes to our mother’s quality of life and yet how little our society recognizes the scope of what family caregivers like her are contributing. As an economist, I also see in her predicament a microcosm of a much bigger problem. Just as our family can’t expect my sister to keep this up indefinitely, nor can our society count on unpaid caregivers to perpetually tend to the growing needs of the nation’s elderly.

Carol belongs to an army of more than 43.5 million people who provide their loved ones with what AARP estimates to be US$470 billion worth of care – an amount that exceeds the gross domestic product of 170 of the world’s 195 nations.

Because no money changes hands, economists don’t count unpaid caregiving when they tabulate GDP – the sum of all economic activity. But this work does count tremendously in terms of the well-being, economic and otherwise, of the elderly and the disabled and their relatives.

Expecting that everyone in my mom’s predicament will have adult children able and willing to care for them is becoming increasingly unrealistic. Demographers expect that the number of Americans over age 65 will more than double in less than 50 years, rising from 46 million in 2016 to 98 million in 2060. The many seniors with one or more chronic conditions will require professional and informal assistance.

Who will take care of all these additional seniors?

The average number of children women have has declined, falling to 1.9 in 2016 from 3.7 in the 1960s. That leaves fewer children to care for the growing number of elderly parents. And since the share of women who earn a living in the paid workforce rose from about 1 in 3 in the mid-1950s to more than 1 in 2 by the 1980s, grown daughters have become less available to care for their parents at a time when the majority of people providing for seniors are still women. For example, sons caring for a parent did 16 percent of this unpaid caregiving while daughters did 31 percent, in 2011.

Caring for elderly and disabled family members takes a big financial toll, including hundreds of thousands of dollars in lifetime earnings if it means retiring early to do it, according to Fidelity, the investment company.

When no relative steps up to serve as an unpaid caregiver when the need arises, families hire paid caregivers or move their loved one into a nursing home, where a private room may cost $100,000 or more per year. Medicare rarely covers nursing home stays, and eligibility for Medicaid coverage is limited, so institutional care like that is generally out of reach for all but the wealthiest Americans or those with long-term care insurance – which also costs a lot.

The Bureau of Labor Statistics predicts that caregiving jobs will be among the fastest-growing in the years to come, with the number of home health aides increasing by 41 percent from nearly 3 million in 2016 to more than 4.1 million within a decade.

However, many states already face a shortage of these workers. Partly that’s because these jobs pay very little – averaging $22,170 per year in 2016 for home health aides – and offer scant benefits. Compensation is so low that about half of paid caregivers rely on some form of government assistance to make ends meet.

The industry’s low pay helps explain why roughly a quarter of home health workers are immigrants. Until now, foreign-born labor has narrowed this labor gap. The Trump administration’s efforts to crack down on undocumented immigration and reduce the number of immigrants with legal status, therefore, are sure to make it harder for families seeking someone to care for an aging relative to hire workers.

I believe any serious debate over immigration policy should consider the growing need for paid caregivers and establish more ways for immigrants willing and able to do this work with a path to citizenship. There are specific visa programs for agriculture and hospitality. Why not caregiving?

Men are often hesitant to take jobs in caregiving due to gender stereotypes. If those attitudes were to change, the pool of potential caregivers both paid and unpaid would expand. However, transforming gender attitudes is a difficult and long process.

In the meantime, Medicaid and Medicare can make caregiving more financially rewarding by increasing the rates they pay for elder care, spurring the kind of salary growth for home health aides required to make the profession more attractive.

And to ease the financial burden of caregiving all around, Medicaid and Medicare could ramp up benefits for care delivered in the home and in institutions and extend coverage to more people.

Another way to ease this financial burden would be to adjust the tax code.

Congress appears to be inching in that direction. Several members, including Sens. Shelley Moore Capito, a West Virginia Republican, and Tammy Baldwin, a Wisconsin Democrat, introduced the Credit for Caring Act in 2017. The measure, which didn’t make it into the tax code overhaul, would give Americans who earn at least $7,500 a year and also care for relatives with specific disabilities a tax credit worth up to $3,000.

If enacted, this would mark a step in the right direction. But I believe much more needs to be done to prepare for the coming wave of elderly Americans, millions of whom will require assistance.

This legislation would do nothing, for example, for people like my sister who do unpaid caregiving work full-time and arguably need the most help.

Loading...
Newer Post
Macron on how AI will shape the future, and threaten democracy
Older Post
Why Losing a Dog Can Be Harder Than Losing a Relative or Friend